How it began…
Its surgery day and I am a little (a lot) nervous. Enoch and I didn’t sleep much and we have an early morning. Check in is at 6:30 am SLC. The night before I posted on Facebook:

Ok so I’m heading into surgery early morning and needing some help. Before I go under and as I’m driving to the hospital I would love to put together a music list that will get me pumped and ready to go under. So tell me what songs you love most that gets you going or just speaks to you. Love you all so much!

Thanks for all of your responses. They were all encouraging and made me smile and YES I listened to every request.

They began sedating me before they took me back to the operation room to help relax me. Last visit with my Doctor to discuss the hardware that’s been causing so much pain. Enoch and I say our goodbyes and the nurses roll me back to the surgery room. The ceiling lights passing me the sedation was setting in and the only thing I could think of was Star Wars. Yes, I began singing Star Wars theme music. Thank goodness my nurse that was rolling me into the operation room had a sense of humor and began singing along with me. Rolling me into the cold operating room nothing was a surprise to me in there. It was definitely a familiar scene; bright lights and everyone in blue. Soon the doctor is in and I am now put fully under to begin the process. 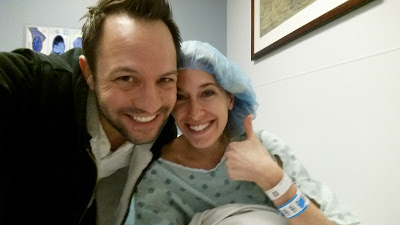 10:18 am
Surgery went great and she is in recovery. Dr. David Nathan said that everything went well. He had to cut just a little higher than the original incision. Then cut her muscles along the spine and spread them apart. He had to remove some of the bone around parts of the hardware. Then was able to remove the hooks, screws and he had to saw the bars since the bolt cutters would have been too dangerous to use. The spine had healed nicely and where the screws were causing pain they were pretty close to the surface. He said this is probably the main reason why she felt pain. Then he sutured her muscles back together and skin. She will be kept overnight and released in the morning. Her main pain from the surgery will relate to the muscles but should heal pretty quick.

I woke up and said to Enoch, “I did it again!” my gosh the thoughts began to flood my brain. The feeling of my muscles torn and bones broken came back and I was awake in a nightmare. My body was shredded and all I wanted to do was sleep. I am sent to my room and they begin to surround me with ice. I ask the nurse to take all blankets off of me because I am sweating with pain. Slipping in and out of sleep my twin sister Alisha and Preston brought me flowers and visited for an hour or two. How I wanted to hug them for coming but only could do hand squeezes to show my affection. Dr. Nathan came in soon after to check on me and said everything went well and showed me the hardware they removed. He wanted to look at my incision. Before the nurses sat me up and pulled me forward I apologized for sweating since I could feel drops dripping down my back. To everyone’s surprise it wasn’t sweat just lots of blood drainage from my incision and they quickly began to switch my bandage out and change my bedding. 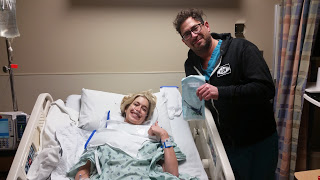 My sister and her husband left soon after and that’s when things began to spiral. I began feeling nauseous thinking maybe I was just hungry I tried to eat and began feeling even more sick and now with a headache. The Nurse insisted for me to take a light nausea pill to help. Soon after taking the pill I began getting worse and my dinner came back up. The nurse then insisted another pill since that also caused my pain meds to come up as well. I didn’t want anything and was thinking, “why on earth would I want another nausea pill.” In order for me to be taking any pain meds I needed something to allow the meds and water to stay down. The night was long. Much to what I thought it would be. Morning finally came and I was excited for food again. Doing great I thought… we were able to go home that afternoon.

Enoch got me situated at home. Pillows and ice packs and my heating blanket. I started feeling a headache but figured I would since what I just went through. Boy this week was long. I ended up with a three day migraine unable to hold anything down. Dr. Nathan responded quickly that third night and told Enoch to eliminate the Percocet. I was feeling desperate. Honestly I would prefer the the pain from surgery than the migraines and the side effects. We are so pleased to say I am finally back on my regular food diet (No diet just any food) and eating well. To help alleviate the pain I am taking 1 Tylenol every 4 hours and staying down flat with ice under my back to help with swelling. That is less pain meds then what I was on before this surgery. I am starting to think this was a good choice.

About the Author: Alayne Wadsworth